Slovakia: No Separation of Church and State

In Slovakia, the separation of church and state is much different than in the United States. The state financially supports the churches based on reported membership and also requires students to either take a religion class (Catholic or Lutheran) or an ethic class (for those that do not want their children taught religion in school).

Below is an interesting chart of the top churches in Slovakia in terms of membership and the state support they received in 2014. 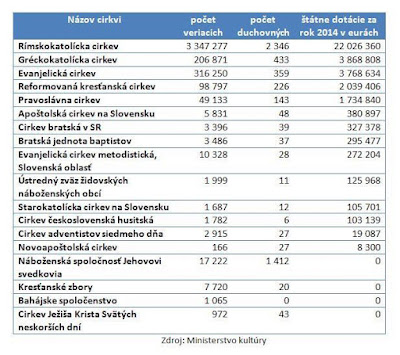 The first column is the church name, followed by the number of members, number of pastors/priests and the amount of state support they received in 2014.

The top five churches in terms of membership are: Roman Catholic, Greek Catholic, Lutheran, Reformed Christian and Orthodox.  As you can see, the majority of Slovaks are Catholic and the state gave the Roman Catholic church more than $22 million euros in that year (a large amount for such a small country).

As I understand it, these payments are partially designed to make up for the property confiscated from the churches during the communist era.  However, according to a study done in 2014, a majority of Slovaks support changes to the state support of churches.

Our tax accountant is working on our taxes now and this will be my first year paying Slovak taxes.  It will be interesting to see the amount of tax we will pay and how much this goes to support the various churches here in Slovakia.  I would much prefer to have my taxes lowered and instead give this additional amount to the church or charity that I prefer to support.

Posted by AmericanBlogger at 11:03 AM